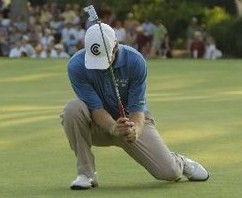 NEW scientific research has shown that golfers who treat their sleep apnea, a major cause of snoring, can lower their handicap by as much as three strokes.

The US research has shown sleep disorder treatment has it greatest effect on older, better golfers.

Researchers were also somewhat surprised to discover golfers were much more likely to stick with sleep apnea treatment if they believed it could improve their golf, rather than just being given overall health benefit messages.

The study, entirely on the level, was presented this week at CHEST 2009, the 75th annual international scientific assembly of the American College of Chest Physicians (ACCP).

“More so than many sports, golf has a strong intellectual component, with on-course strategizing, focus, and endurance being integral components to achieving good play,” said researcher Marc L. Benton.

“OSAS can lead to daytime sleepiness, fatigue, and cognitive impairment, all side effects which can negatively impact a person’s ability to golf to the best of one’s ability.”

“As any golfer knows, when your ability to think clearly or make good decisions is compromised, the likelihood of playing your best is greatly diminished,” said Dr. Benton. “Through treatment with NPAP, we can improve many cognitive metrics, such as attention span, memory, decision-making abilities, and frustration management, which may, in turn, positively affect a person’s golf game.”

Results of the study showed that the best golfers, (defined as those with US handicap indexes less than 12) had the biggest improvements in their game. Within this group, the average handicap dropped from 9.2 to 6.3.

“The biggest handicap improvements occurred in the lower handicap, often older golfers. This group typically would be expected to trend in the opposite direction due to age-related deterioration in strength and endurance,” another researcher said.

“The drop in handicap among the better golfers probably reflected that the major limiting factor was not golf skill but cognitive compromise that improved when the sleep apnea was treated.”

Dr. Benton estimated that there are 1 to 3 million regular golfers in the US (regular defined as 10 or more rounds per year) who have OSA, and most are undiagnosed or untreated.

However, even when proper treatment is offered, it is only effective if it is used regularly. In men, studies have reported compliance rates as low as 40 percent. Patients cite many reasons for noncompliance with NPAP, including discomfort, inconvenience, cost, noise, or embarrassment.

In the current study, nearly all patients in the treatment group had a compliance rate of above 90 percent.

In other words, the conference is being told, tell them it is good for their golf games and they’ll do it.

“In the case of this study, the possibility of improving one’s ability to play golf appears to have been a significant motivation to improve treatment compliance.” Dr Benton said.

The study apparently didn’t comment if the lack of rib and leg bruising caused by being elbowed and kicked by non compliant partners was also a factor in the better golfing scores.