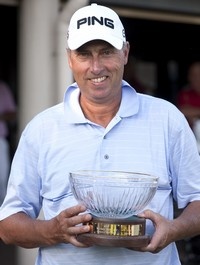 VICTORIAN Michael Harwood has capped off his return this year to tour golf with a thrilling win in the $300,000 Handa Australian Senior Open at Royal Perth Golf Club.

Harwood beat overnight leader and tournament favourite Peter Senior and fellow Victorian Michael Clayton in a sudden death play-off to take a title that is the richest in Australian senior golf.

“It’s fantastic to be here and win such an exciting title,” Harwood said.
“After 10 years of selling chocolates and candy in the Pro Shop I didn’t think I’d be back here.”

Harwood was referring to his decade long absence from top professional golf before turning 50 earlier this year and joining the European Seniors Tour.

“This is the best year of my life going back playing and practicing hard again. It’s been difficult sleeping in different beds week in and week out and it’s been tough on my wife Donna to be spending so much time apart again but we’ll get there in the end,” he said.

Harwood was Runner-up in the 1991 British Open, two shots behind Ian Baker-Finch at Royal Birkdale. His best year on the European Tour came in 1990 when won both the Volvo Masters and the PGA Championship. He also ended Greg Norman’s sequence of six victories in the Australian PGA when he won in 1986.

Senior was making his playing debut in Australia as a “Legend” and Harwood said beating him made the victory sweeter.

“It’s great to win an Aussie Senior Open title, but even better to beat Peter Senior cause he is an unbelievable player. I’m so pleased to beat a champion like you Pete!”

An unfortunate bogey at 11 saw Senior’s round begin to falter and a double bogey at 14 followed by another dropped shot on 15 had the trio all tied on five-under with three holes to play.

After a terrific approach into 16, Senior made birdie to again take the outright lead.

After an errant drive on the last hole, Senior could only manage par and watch as both Harwood and Clayton rolled in birdies to force the championship into a sudden death play-off.

Having found the green safely in regulation on the first play-off hole, both Senior and Clayton narrowly missed their birdie chances.

Harwood said he was excited about the growing Australian Legends Tour and looked forward to playing as many Pro-Ams and events as possible next year.

Defending champion Wayne Grady closed with a 72 for a three-round total of one-under (72, 71, 72) but it was New Zealander Garth Domigan who produced the shot of the day with an ace on the par 3 tenth hole.