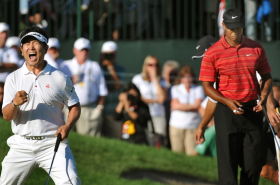 In his eighth Major Championship appearance the 37 year old father of two shot a final round two under par 70 to come from two shots behind overnight and claim the title from Woods by three shots. He becomes the first player to beat Woods in a Major Championship when Woods has led or shared the lead going into the final round.

Woods shot a final round two over par 72 to finish outright second followed by Lee Westwood (70) and young Irish star Rory McIlroy (70) who claimed third place on three under with Lucas Glover a further shot back and outright fifth.

World number 110 coming into the event, Yang moves just outside the world top 30 with the win, his second for the year after he claimed the 2009 Honda Classic in March. His battle with Woods took a dramatic turn when he eagled the par four 14th hole in spectacular style chipping out of the bunker to go one shot ahead with four holes to play. An uncharacteristic bogey from the world number one at the 17th hole saw Yang head to the 18th with a one shot buffer. Unlike many before him paired with Woods, the 2007 HSBC Champions winner and five time Japan Tour victor kept his cool with a sensational approach shot that just missed the hole leaving him with a birdie putt to win as Tigers effort ran past the hole.

A delighted Yang fist pumped the air and raised his bag in triumph.

“You never know in life, this might be my last win as a golfer but it sure is a great day!” said the likeable champion who only took up golf at the age of 19.

“It’s going to be a big foundation for me to continue playing at the top level. It just means the world right now. It hasn’t really sunken in but I do know the significance of it.”

For Woods, it was an unfamiliar experience but he made no excuses. His total of 33 putts today was the highest for his four rounds.

“I hit the ball so much better than my score indicates. I hit it great all day,” said Woods. It was just a terrible day on the greens. I either misread the putt or had bad putts. I didn’t make anything except for the 14th hole. I think it was the only putt I made all day.”

“I was certainly in control of the tournament for most of the day. I hit the ball great off the tee, hit my irons well. I did everything I needed to do except for getting the ball in the hole.”

For the Australasian contingent it was a disappointing tournament as Brendan Jones and Robert Allenby finished the best of the 15 strong contingent in a tie for 24th place.

A devastated Jones was on the verge of tears after a final round five over par saw him drop from a tie for eighth place overnight. Beginning the final day on two under and just four shots off the lead, Jones was still four shots behind at the turn, but in what he described as a nightmare, he recorded six bogeys in his final nine holes.

“I cannot describe to you how I feel, I have never been so disappointed after a round of golf in my life. I am just standing here a shattered man,” said Jones.

“I wasn’t playing poorly and that is the thing that is getting to me. I didn’t play any worse than I did the first 11 holes.”

“Everything was going the wrong way. I just butchered hole after hole. I feel like I should have shot five under out there today and here I am shooting five over and that’s hard to take.”

It was a similar scenario for Allenby who came into the event on the back of a runner up finish at last week’s WGC Bridgestone Invitational. His first round of 69 set him up well but subsequent second and third rounds of 75 set him right back. His final round even par round was little consolation.

“Obviously I came into this week full of a lot of confidence but just a few miss hits on Friday and Saturday were quite costly really,” said Allenby.

“I’m disappointed because after the first round I was there and then fell away, but you know, that’s golf, you just keep moving on and keep trying.“

World number eight Geoff Ogilvy finished three shots further back after an even par final round 72.

“I’m pretty disappointed,” said the 2006 US Open Champion. “I felt like I was playing alright. I didn’t make enough putts and got frustrated. We all know how to make putts because we’ve all done it before. I just have to get back there somehow.”

The youngest of the Australasian contingent Michael Sim faired the best in the final round recording four birdies on the back nine to finish with a final round one under 71 and seven over for the tournament.

Sim, the money leader on the 2009 Nationwide Tour made his Major debut this year at the US Open where he finished T18 after playing the final round with Tiger Woods and made his USPGA debut this week in what has been a big year for the 24 year old.

“It’s my second Major and it’s just a big learning curve, I was lucky enough to make the cut,” said Sim who needs just one more win on the Nationwide Tour this season to gain an immediate promotion to the USPGA Tour.

“It would have been nice to get into contention but my game hasn’t probably been in the right place probably the last three tournaments. I had my coach David Milne here this week and we worked on a few things and I think next week could be a good week for me.”

Victorian Richard Green closed with a three over 75 to finish nine over the card and in a tie for 60th place with Nathan Green a further shot back and tied 60th. New Zealand’s David Smail shot a final round 76 to finish 11 over for the tournament.