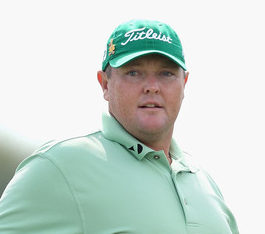 SADDENED to learn Australian golfer Jarrod Lyle has been diagnosed for a second time with leukaemia – and on the eve of the birth of his first child.

His wife Briony is being induced so Lyle can be at the birth in Shepparton before travelling to Melbourne to begin treatment on Monday.

Lyle, just 30, was diagnosed with acute myeloid leukaemia as a 17-year-old but endured nine months of chemotherapy and bed rest before getting his golfing career back on track and eventually taking his place on the US PGA Tour.

A couple of weeks back he matched his best ever finish on the tour when he missed a playoff by two shots and tied for fifth at the Northern Trust Open in California.

The following week he contracted an infection from a bug bite while playing in Mexico.

He flew back to Australia last week and as a precaution his local doctor in Shepparton ran some blood tests which revealed the shocking diagnosis.

Lyle’s manager Tony Bouffler was reported as saying Lyle was in good spirits and excited elated about the birth, which was expected late Friday night or Saturday.

Bouffler said the leukaemia treatment was “overwhelming” and Lyle would have struggled physically to be at the birth if his wife had gone full-term.

Close friend Robert Allenby was shocked by the news.

“It’s a complete tragedy,” Allenby said. “But I told him he has beaten it before and he can beat it again. He has a big fight on his hands but he has the motivation of being the father and husband he wants to be which will give him strength. My heart goes out to him and his family and we all need to get behind him and support him.”

“All Jarrod needs to know is everyone over here on this side of the world are thinking about him and wishing him well,” Chalmers said.