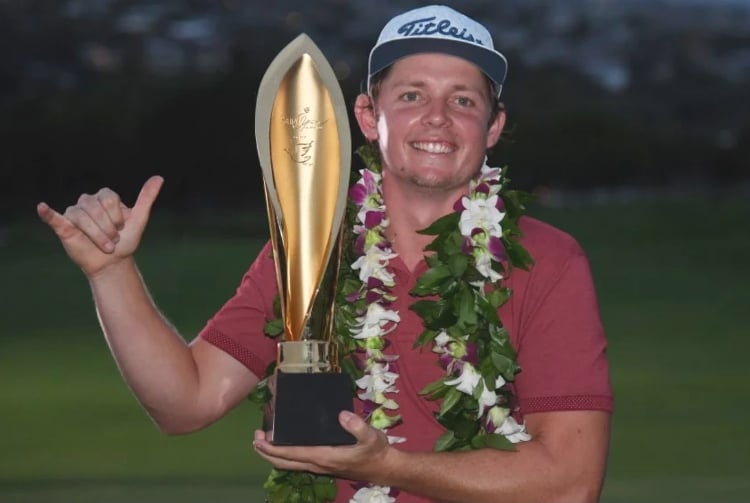 CAMERON SMITH’S dogged come from behind victory at the Sony Open in Hawaii on the weekend is hopefully a sign of a great 2020 ahead for Aussie golfers on the world stage.

The 26 year old Queenslander was coming off some inspiring performances at the Presidents Cup at Royal Melbourne and Sunday was his first solo victory on the US PGA Tour.

It was the second Australian international victory within hours, with Adelaide’s Wade Ormsby claiming the Hong Kong Open on the Asian Tour shortly before.

Whilst there is much to be admired about Smith’s golf game, with his swing analysed in the video below by CBS Sports analyst Peter Kostis, there is one aspect of his game that hasn’t been given lots of attention, and that’s his totally even-keeled, non emotional demeanour while on course.

Smith, the quintessential Queenslander, was no doubt still wearing that humble, no-emotion cloak when he sunk his one foot par putt to beat American Brendan Steele on the first play hole at the Waialae Country Club near Honolulu.

It was a maiden US solo victory that will always be a highlight of his career, but he reacted like he had just sunk a one foot putt to finish tied third in the Wednesday morning comp in Indooroopilly.

Questioned about how he felt in his greenside interview before a vast international TV audience, the no doubt internally jubilant Smith ventured: “It’s quite good.”

Smith allowed himself to liven up and really celebrate a little later, but perhaps you can take a lot out of his on course mindset.

We followed Smith with a camera quite a bit during the Presidents Cup and the Australian Open in December (and at the World Cup in Melbourne in 2018) and as you always do with players you’re hoping for a good photo of maybe a big birdie celebration; but with Smith, while there might be plenty of birdies – the celebration is just a slight lift of the ball and a nod.

So take what you will from the swing analysis video below – no doubt there will be a lot more to come – but also maybe dwell on the composure and self-control needed to win a tough battle on the US tour, or even the Wednesday members comp in Indoorapilly.