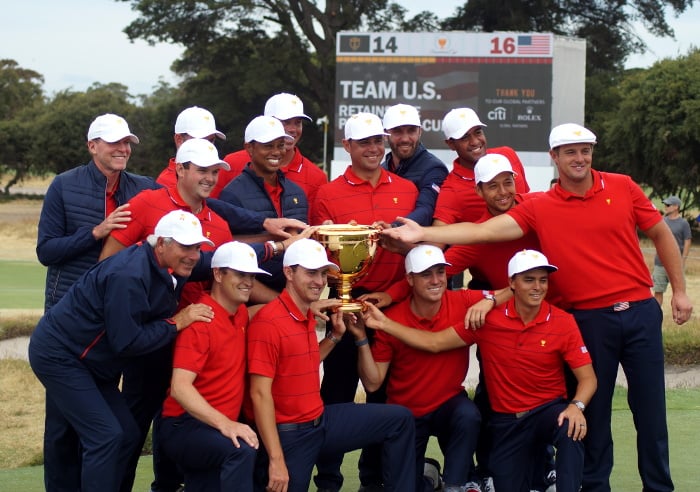 Local golf writer CHRIS VOGT was at Royal Melbourne bright and early for a day that promised so much for Ernie Els and his International Team. Unfortunately, it was US playing captain Tiger Woods and his star-studded team who took the 2019 edition 16 – 14.

A cool morning, and most of Melbourne turned out for the final day of the Presidents Cup. Queues at the gate a good two hours before opening said plenty of the feast that lay ahead…

Captain Woods struck shot after pretty shot on the breezy practice fairway, his Tiger driver cover looking on. Composed and serious, both Tigers seemed set for the task at hand. Patrick Reed was there, too, and didn’t he have the blinkers on. Crisp wedges dead straight, a word with Assistant Captain Fred Couples, and a steely look.

The grandstands around Royal Melbourne’s first tee heaved with spectators in anticipation of the day’s first group. Tiger and Mexican revelation Abraham Ancer arrived on time to quite the reception and put solid drives into play.

A regulation birdie at the second for Tiger and a few steps through the wispy grass to an incomparable string of holes. A stunning creation this third, perhaps the finest of Alister Mackenzie’s work. The green complex blends seamlessly into its surrounds, lovingly carved from ideal terrain, its bunkers receding into the sand, the bracken, the tee tree. There’s so much for the eye to take in. To stand on the tee is to think about more than the shot. Yet block it out the golfer must, for there’s a tournament to win. Tiger found himself at the base of the false front, having attempted the perfect shot to a precarious pin. Down it trickled and rolled, from where he pitched up, only to miss his par attempt. And so to the 4th. Is this the toughest green in world golf? The dogleg gem of a par 4 stands up with any two-shotter in the land. All week it’s been treated with due respect, and today no less from Tiger. A conservative couple of irons into the dramatic setting, two cautious putts, and one all-time great farewelled another.

Patrick Reed stepped into his work, oblivious to the noise that has engulfed him this week. Perhaps energised by it, Reed was 6 up through 6 against a hapless CT Pan, and primed to do his captain proud.

Sweet-swinging South African Louis Oosthuizen jumped out against Matt Kucher, taking the opening trio of holes. But Adam Scott was in trouble early, American Xander Schauffele 4 up on the local. Schauffelle’s countryman Justin Thomas was having the better of another Australian, Cameron Smith. But Marc Leishman led Rickie Fowler through 6.

Abraham Ancer has impressed all week, and is a star of the future, if not already. Yet he appeared to have run out of game against the U.S. captain. Tiger’s approach to this match was faultless. He played a contained, controlled brand of golf, just perfect for Royal Melbourne. Such a pleasure to watch him brush the ball close with his putter from well off these incredible greens. And precise iron play, too. Not once did he lash at the ball. The end came for Ancer at 16.

Patrick Reed’s early blitz on CT Pan was halted on the back nine. The man from Chinese Taipei launched an attack of his own, reeling in four of those holes before Reed steadied to take a point for the United States. Dustin Johnson clinically dismissed Haotong Li to put his country ahead 11-10.

Inspired golf from Japan’s Hideki Matsuyama kept him ahead of Tony Finau for 13 holes. But the mistakes came and he limped home to a tie and half a point for the Internationals. However, Sungjae Im calmly put away Gary Woodland to tie up the contest.

The afternoon developed into a grind for both teams. Tight matches, with the Americans making putts but unable to prise bigger gaps. Eruptions of crowd noise across the course, interpreted as you like. And drama never far away. Bryson DeChambeau had a team cap fashioned in his favoured Ben Hogan style. He had a chance to doff it for the first time this week, but his tight match with Canadian Adam Hadwin finished square.

But the Americans kept pressing, and class began to tell. Webb Simpson and Patrick Cantlay put away their opponents with authority, Xander Schauffele likewise. But behind them, Cameron Smith was running hot against U.S. star Justin Thomas. The American has been better than most this week, but his putter betrayed him coming in. Smith left the 17th jubilant to keep the Internationals in it.

Louis Oosthuizen controlled his match until opening the door for Matt Kucher at 14. The American calmly walked through and, with a stunning approach to the 17th, delivered the Presidents Cup to the United States for the eleventh time. The International win tally remains at a solitary one, thanks to the 1998 win at Royal Melbourne.

The reaction of Captain Tiger Woods recalled those scenes on Augusta’s 18th green last April. Yet this was different. It was unchartered territory for one with 82 victories across the globe. For a clearly emotional Woods, it was nothing less than a team effort, and the culmination of a year’s work he felt privileged to contribute to. A gracious Ernie Els was among the first to congratulate his opposite number, and will regroup before considering another tilt in 2021. Tiger will head home in the knowledge that opportunities for redemption keep coming to those who believe.