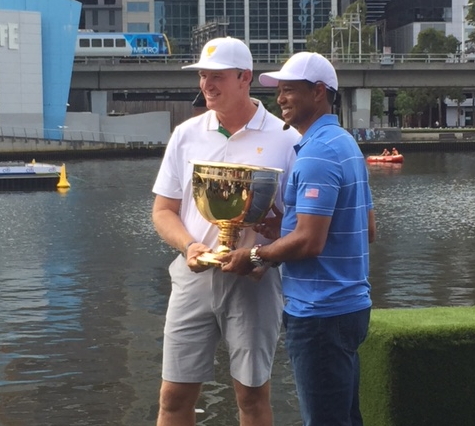 There’s been much anticipation around the first appearances of this week’s Presidents Cup players. On Monday a blazing Melbourne morning had deteriorated into a dull, muggy, equatorial afternoon. It was stifling by the Yarra River. Needless to say, Melbourne’s sports fans were undeterred by such trivialities.

A crowd worthy of the first tee filled a makeshift facility. All ages, jamming themselves into vantage points, shoulder to sweaty shoulder. PGA Commissioner Jay Monahan got proceedings underway, talking of the charitable side to the event, and had plenty to say of “the iconic” Royal Melbourne Golf Club. Monahan was followed by a presentation of the Junior Presidents Cup teams, and a trophy to the victorious U.S. captain Justin Leonard.

The stage was then quickly vacated to accommodate representatives of the two teams who’ll do battle from Thursday. Ernie Els led Adam Scott and Cameron Smith out in team colours to a patriotic reception. They were followed by the jetlagged Justin Thomas, Xander Schauffele and Tiger Woods, whose team had flown through the night and day from his tournament in the Bahamas. Questions about the course and competition revealed little, but it didn’t matter; the public were lapping up the opportunity to see these guys, that guy, up close.

And so they moved to a tee set up at river’s edge, and took shots at the island green anchored in the murky Yarra. Australian tennis star Ash Barty was there to take a shot, and you couldn’t keep her from smiling. With all she’s achieved in 2019, this looked like the icing on the year’s cake. Collingwood footballer Mason Cox positioned his rangy frame around a wedge and found the green. Players from the Juniors and All Abilities events also had shots. Oh, and the U.S team won, with no help from Tiger, whose two attempts settled nicely at the bottom of the Yarra.

Quite the scrum followed as media positioned themselves for photos and TV interviews. Tiger looked serene amid the feverish jostling. He may have been weary from the flight. Or maybe he always looks this way. The scene was right on the edge, but he handled it all in the manner of one who has lived no other life. The game he brings to the course on Thursday will matter, and he craves a team win. But whatever the golf, the Tiger show will be never less than compelling. 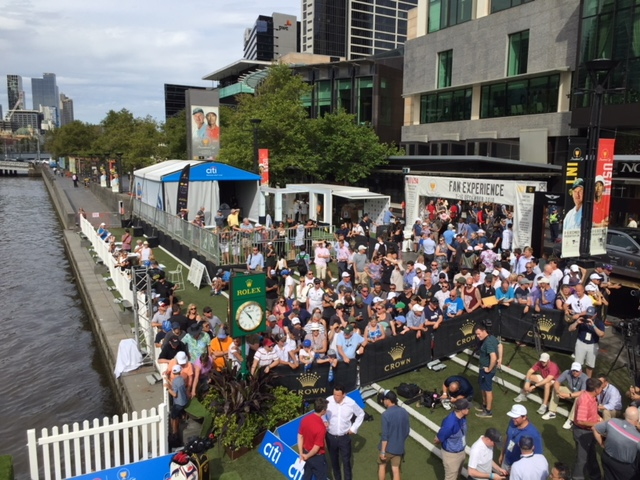 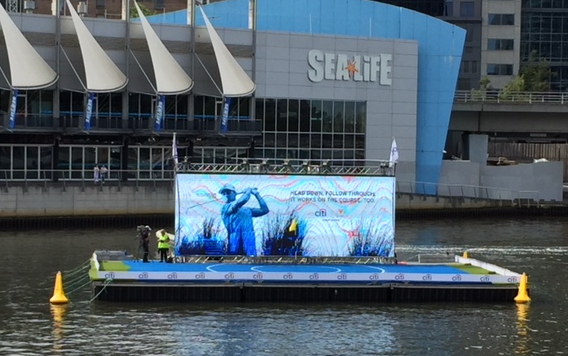