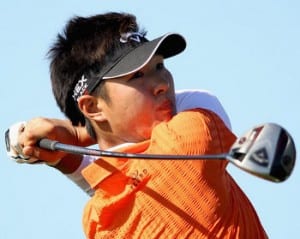 YOUNG Kiwi rookie Danny Lee is joint leader after the first round of the 2012 AT&T Pebble Beach National Pro-Am in California.

The 21 year old is in his first season on the US PGA Tour and with two eagles in a 9-under par 63 was displaying the kind of talent that earned him rave reviews as an amateur.

A shot behind the three leaders are Americans Ken Duke and Brian Harman.

The tournament, a pro-am with the first round played over three courses at Pebble Beach, also marks the return to the 2012 PGA Tour of Tiger Woods.

Woods shot a solid 4-under 68 on the Spyglass Hill course, with the uses of this, Pebble Beach itself where Lee and Johnson competed and Monterey Peninsula where Wi shot his 9-under 61, making direct comparisons a little difficult.

“I don’t know if it’s a good sign or a bad sign,” Woods said about his 68. “With the scores the way they are, I thought I could have it lower than I did. The guys are just tearing this place apart with no wind. I’m not too far away from posting a good number out here.”

The leading Australians were Aaron Baddeley and Nathan Green who were equal with Woods tied on 15th after shoot 4-under rounds of 66 at Monterey Peninsula.

Rod Pampling was 2-under, Matthew Goggin, Stephen Bowditch and Jarrod Lyle 1-under, Geoff Ogilvy and Stuart Appleby on even while Steve Elkington was 1-over with Nick O’Hern and Matt Jones. Gavin Coles will need to pull his socks up at 4-over.