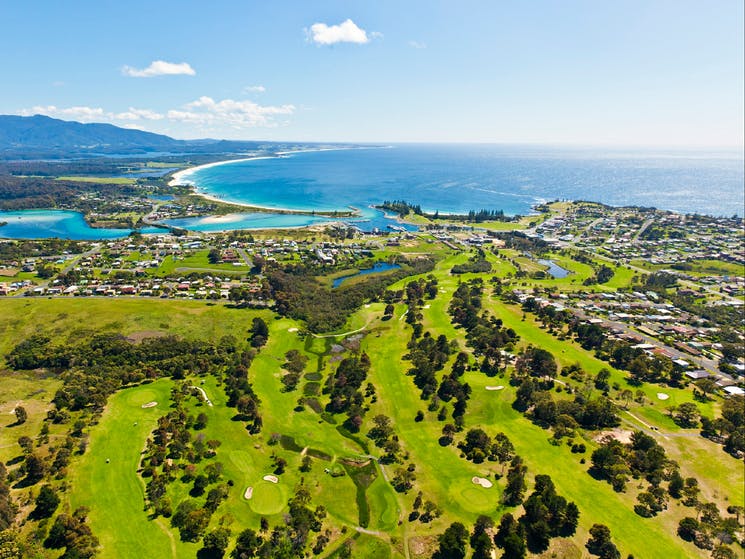 I’M sitting in the clubhouse looking out over the beautiful jewel on NSW Saphire Coast that is Bermagui Golf Course. Aha… there’s Rodger Davis going through his forward press, Terry Price about to make another picture perfect golf swing and Mike Harwood surgically implanting his ball next to another flag.

The Ladbrokes Legends Tour has arrived and the boys are all out on the course showing the locals how they can still propel their pills in the general direction of their targets with very little effort. In fact, last month it only took 64 blows for Mike Harwood to conquer the new Strathfield layout, David Fearns snuck around Concord in 63 and Peter Senior beat Lakelands Golf Course to within an inch of its life with two rounds equaling minus 15!!

Bermagui Country Club has always been a very good test of golf and after a quick squiz around the layout nothing has changed… except for maybe some tough pin placements, the course is pristine. Dare I say, yet another example of a regional golf course more than likely relying on a skeleton staff and enthusiastic volunteers able to present a course equal to anything in the city.

Despite some late showers the lads took advantage of the lack of coastal winds with 5 players tied for the lead at 3 under.

One of those was European Senior Winner Terry Price – “Its not hard to play well here.  The people are great and the course immaculate”. When I asked Pricey who might throw out a challenge –  “Craig Warren (69), knows how to win and Glen Joyner (69) plays well all over the world so I’ll be keeping an eye on them but there’s is so much talent on this tour I’ll have to keep the throttle down”

The final round is Tuesday and with 12 players under par and within 3 of lead.