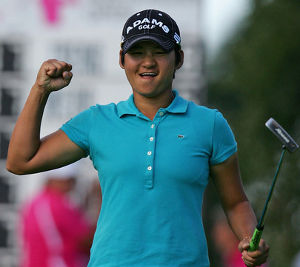 SIX of the world’s top 10 women golfers will take to the iconic Royal Melbourne golf course this week battling for the 2012 ISPS Handa Women’s Australian Open.

The favourite has to be world No.1 Yani Tseng who will be gunning for her third Australian Open title in succession but there are many other contenders ranging from Australia’s 37-year-old five time champion Karrie Webb down to 14-year-old New Zealander Lydia Ko.

Just a couple of weeks back Ko became the youngest player of either sex ever to win a professional tournament with her victory at the New South Wales Open and she is not the only teenager in the mix.

The wealth of talent is aided by the fact that this year for the first time the Open is co-sanctioned by the US LPGA and the event will be the opening tournament of their 2012 global season. It is also of course part of the ALPG and Ladies European Tours.

After her amazing 12 tournament victories last year the 23-year-old Tseng is a standout and is ominously talking about having made some very positive changes to her already powerful swing.

”It’s stronger,” the Taiwanese star said this week of her remodelled swing. ”I have more power. I don’t swing as hard as before. I feel I am swinging easier and striking the ball better.

”Now I feel that if I swing 70 to 80 per cent, the ball is still flying better than before. I always tried to swing really hard. Now I don’t swing so hard but the ball still goes that far.”

We’d all like to be able to say that and it should be fascinating to watch Tseng in action on a course she encountered for the first time in practice rounds this week.

The other Top 10 contenders include Norway’s Suzann Pettersen (No.2), American trio Cristie Kerr (No.4), Brittany Lincicome (No.9) and Stacy Lewis (No.10) as well as South Korean Jiyai Shin (No. 7).

Queenslander Webb, who has also been talking up some positive swing changes this week, will lead the Australian charge. The last of her four Australian Open titles came in 2008 at Kingston Heath.

“I really believe I still have some great golf to play,” Webb said this week. “If I can achieve these swing changes, I believe that is a chance … you never say never.”

Another youngster well worth highlighting is 16-year-old American sensation Lexi Thompson who last year became the youngest player in history to win an LPGA Tour event when she took the Navistar Classic last September and followed it up with the same claim to fame on the Ladies European Tour when she won the season-ending Dubai Ladies Masters.

Of course you can’t leave out South Korea, which has become a powerhouse in women’s golf over the past few years.

In addition to world No.7 Shin the top contenders include Ryu So-Yeon, Park Hee-Young, Kim Ha-Neul and Seo Hee-kyung.

The Women’s Australian Open will be broadcast live on free to air on ABC TV with first round coverage from 3pm to 6pm on Thursday.

Second Round coverage is 3pm to 6pm Friday, Third Round 2pm to 6pm Saturday; Final Round 1pm to 6pm Sunday.