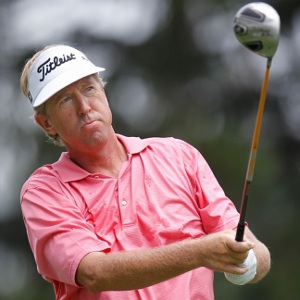 DAN FORSMAN has taken the first event of the 2012 US Champions Tour with a two stroke victory at the Mitsubishi Electric Championship in Hawaii.

The American closed with a 3-under 69 in windy conditions Sunday (local time) for his third Champions Tour title.

Forsman, a five-time winner on the PGA TOUR, finished with a 15-under tournament total to take the US$307,000 winners cheque in the 41-man event.

He opened with rounds of 67 and 65 to take a two-stroke lead into the final round. He never lost it, earning his first win in 20 months.

“On the 18th green I couldn’t even speak,” the 53 year old said. “I am really humbled to top this field of guys I’ve admired and competed with all my professional life. The chance to be on top of a distinguished group of players like this is something I’ll always cherish. You’ve got to be blessed to have opportunities like this and I feel like I am.”

Forsman struggled with a painful left hip last year, and had just one top-10 finish. He dropped to 45th on the money list after finishing in the top 10 in his first two seasons on the tour.

“I sat home over the holidays and kept thinking, `What will it take to get through the door,'” he said. “I kept thinking, `I’ve got to do the little things that all add up.'”

Mark Calcavecchia, Jay Haas, Brad Bryant and 62-year-old Tom Watson tied for seventh at 10 under. It was Watson’s ninth top-10 finish in 12 starts in the event.

The next Champions Tour event is the Allianz Championship in Boca Raton, Florida, on February 10 to 12 where Tom Lehman is the defending champion.