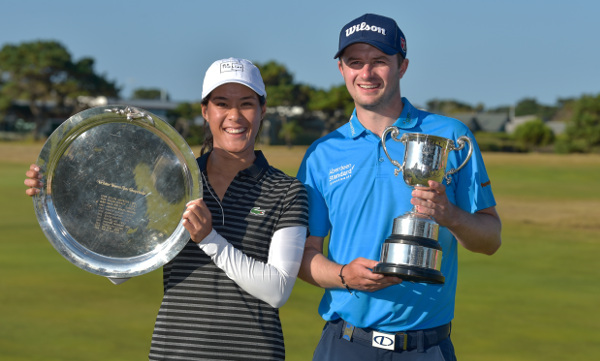 AUSSIE golfers were looking good for a while there as a very successful 2019 ISPS Handa Vic Open graced Barwon Heads but it was a Scotsman and a Frenchwoman who unexpectedly burst through in the final round to claim their respective trophies.

David Law stood on the 18th fairway at 13th Beach today with a 195-shot over the swampy wasteland to negotiate, knowing that he needed eagle to beat Australia’s Wade Ormsby.

That 448-metre, right-to-left shifting par-five with is amphitheatre around the green has quickly arrived as one of the brilliant closing holes in Australian golf. Add David Law from Aberdeen, Scotland to the gathering pantheon of legends.

He thought about four iron, but he knew he needed an eagle. Out came the 21-degree hybrid club. It landed softly and stopped just inside three metres from the flag. Cue a big roar from the crowd.

“If we needed four to win or five to win, I probably would’ve hit four iron,” he said. “But needing three to win, four (iron) was never getting there. Hybrid got it the whole way back. It was the right shot at the right time.”

Then he buried the putt for an eagle to reach 18-under par. Cue the second big roar across the links. “Under that pressure and under that situation, needing to pull it off, it’s something I’m so proud of.”

It wasn’t over yet. Ormsby had been calm and impassive all day and a shot ahead as he reached the 17th tee, the par-three back into the breeze. He was within a breath of his first win on home soil, having secured his first European victory in 2017. But his nerves jangled in the moment.

At 17 he smothered his tee shot long and left, into a tricky spot behind the green. Trying to lob his pitch from 25 metres on to the green and kill it, the ball did not reach the putting surface, and the Australian grunted his disapproval. Another poor chip and two putts later he had a double bogey that will live in his memory for quite a while, and he had lost the lead to the Scotsman.

But an eagle at 18 would have fixed it, at least for now, and Ormsby killed a three wood second shot on to the green and trickling into the back fringe. From eight metres to extend the contest, his putt for eagle sagged low and right and it was Law’s title. Ormsby was left with only regrets. He’d shot 70 on the day and looked the winner until those few moments around 17. “Got to try to take the positives from it,” he said. “Disappointed, for sure.  What can I say?  Disappointed.  Would have been nice to win on home soil.

The 27-year-old Law won by a shot from Ormsby and Brad Kennedy, the 44-year-old Australian who was the other player to make a run on the final day, bolting through the front nine in 30 to join Ormsby at the top, and not going away until he made a costly bogey at the 17th. Ultimately Kennedy shot 67 and did all that he could. South African Justin Harding (16-under) was a further shot away in fourth.

Having ground away for five years on the Challenge Tour in Europe, Law had finally graduated to the main tour this season. Now he has a win that gives him full playing rights for almost two years. His victory was all the more meritorious for the fact he called a penalty on himself at the ninth hole when he accidentally moved his ball in light rough beside the fairway.

“My ball was in the semi-rough, sitting right up,” he said. “I went in to ground my club and as I put my club in, touched the grass behind the ball, and the ball’s just rolled maybe an inch to the side. Which is frustrating obviously. We had to reset and there was nothing we could do. Luckily I kept my head and kept cool which was quite hard to do to be honest.”

Law’s only previous victory was on the Challenge Tour. “To be a winner on tour in my first year is unbelievable,” he said. “It’ll take a long, long time for this to settle in. I’m going to enjoy every minute.”

Celine Boutier was the No.1 amateur in the world whose denouement was waiting to unfold. At 13th Beach, the Frenchwoman finally delivered on promise with the first LPGA Tour win of her career.

She did it in style on a friendlier final day on the links, the opportunity presented when overnight leader Kim Kaufman of the United States, fell away badly.

Boutier started out two shots from the lead but quickly had the reigns, after Kaufman’s three wood second to the par-five fifth skated off the back of the green and under a small tree. The American took double bogey and was on her way to a 78 that left her tied-eighth and regretting the way she finished.

As for the 24-year-old Boutier, she put together a steady, even-par 72 that was enough for a two-shot win.

The women struggled with the course set-up on the final day, crafted as it was so that it was difficult enough for the men. In the final group none of Boutier, Kaufman nor Su Oh of Australia could break par.

But Sarah Kemp broke the mould, the Australian starting out early and despite a double bogey at the first carding a 65 that put her in the clubhouse at six-under par. Kemp went back to her local digs and waited; it was the knockabout Australian whom Boutier had to reel in. There was only a shot in it as Boutier passed the clubhouse at the 15th.

The Frenchwoman is renowned for frontrunning. At the short, par-four 15th she hit a problematic chip from in front of the green that left her with a 10-metre birdie putt and her lead was just a shot. But the putt hammered into the back of the cup. Although she had three holes to play, it was the close-out moment.

“I feel like I’ve struggled a bit all day with my long game and I just didn’t have the many birdie opportunities,” she said later. “Then on 15 when I made that putt, kind of really made me like motivate myself and made me really more confident in my abilities to win the tournament.”

Boutier, a Parisien whose parents are Thai, put the parachute up. Two shots ahead, she parred in including a tester at the par-three 17th.

“I have heard so much about this event before from the girls playing in it and I was super-excited to come this year,” she said. “It exceeded all my expectations. The courses were great, the people were amazing, the volunteers, the organisation. Honestly just a really really good tournament.”

Of those, it was Oh who might have had the best chance of all. The Melburnian has had a string of top-10 finishes in the Vic Open without winning, and this was another. Her poor start — four dropped shots in the first four holes — made it tough for her.

As for Boutier, it was all new but somehow, familiar. “Champagne, I guess,” she said.