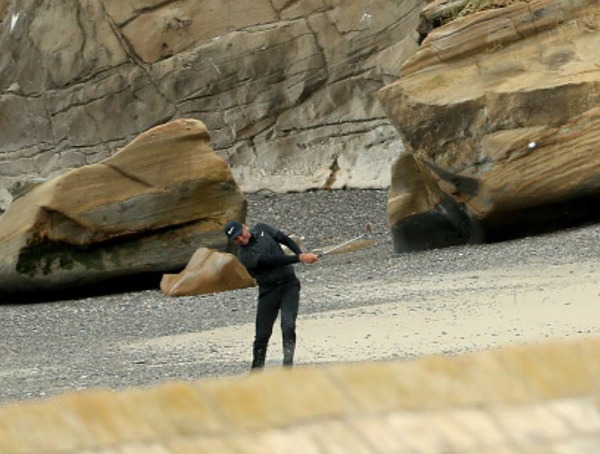 JASON DAY had a chance at back to back wins on the US PGA TOUR on the weekend but needed something spectacular on the final hole of the Pebble Beach Pro-Am to try and make up a three stroke deficit behind leader Ted Potter, Jr.

So you can’t really begrudge the Aussie’s decision with his second shot on the par five to take out his driver and go for eagle – and possible glory.

Unfortunately, his big draw bounced in the hazard left of the green and headed toward the Pacific Ocean.

Fortunately, the tide was out and Day found his ball lying on the rocky foreshore beach. He played an amazing wedge off the rocks into a greenside bunker, then sunk a 17 foot sliding putt for an unlikely par.

It was worked out the par and subsequent T2 rather than T5 finish meant an extra US$271,333 in Day’s pocket, with the Aussie also jumping back into the world top ten. No wonder he was smiling after his seaside adventure.

Despite the final round pressure, overnight leader Potter, who had gone four winless years of injury and poor form, kept his cool to record a popular win, just his second on tour.