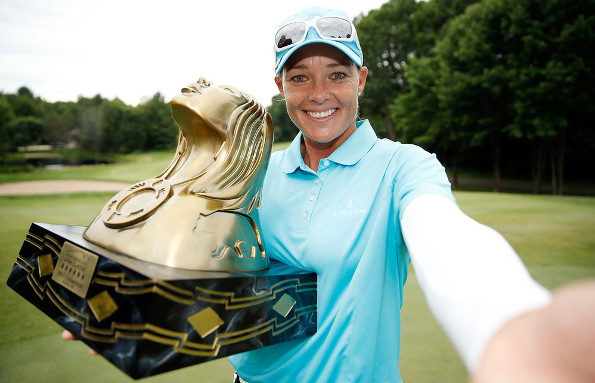 KATHERINE KIRK has her third victory on the LPGA Tour, winning the inaugural Thornberry Creek LPGA Classic to end a seven year drought.

The 35 year old had her tense moments in the final round but birdied the 72nd hole to finish at 22-under par, the lowest four-round tournament total in her career.

After mostly cruising for three days Kirk began the final round with a four stroke advantage over the field and her closing 2-under 70 was enough for a one stroke win over South Africa’s Ashleigh Buhai (67).

“To make that putt (on 18) was huge,” said Kirk. “All wins are good. Winning out here is hard, and it’s gotten a lot harder out here since I first did it, that’s for sure. There is so much talent out here now and it makes it so much harder to win. I think I’m the 15th-oldest player on Tour, so if you’re looking at age it’s more in favour of the younger generation these days… but hard work pays off. I’m grateful for the opportunity to still be playing, and I still love it.”

Kirk will be on an obvious high going into the US Women’s Open in New Jersey this week.

“So much hard work and patience, and I had a rough couple years like 2015 and 2016, and just an amazing team behind me. My husband has been 100 percent supportive the whole time,” said Kirk. I can’t put (this feeling) into words. It’s just a great feeling.”