Victorian golf writer Chris Vogt reports from the Australian Amateur Championship on Melbourne’s Sandbelt and crosses paths with some of the country’s best young talents, as well as one a little older in the legendary Peter Thomson 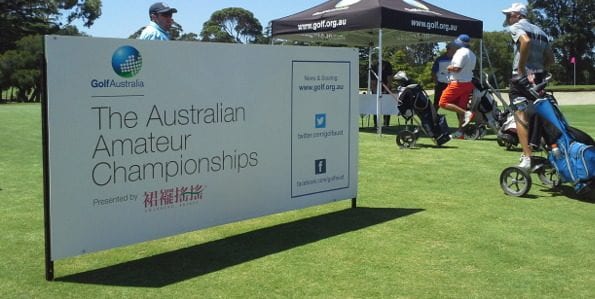 A cloudless morning greeted a field stacked with the best of this country’s young talent, along with dozens of internationals. Assembled at a jewel of the Melbourne Sandbelt, those who’d qualified through the stroke rounds prepared for the rigors of matchplay, still the best form of the game…

By mid-morning, most matches are underway. What’s most noticeable about the Amateur these days is the age and intent of the players. Almost without exception they are young and have their eyes on a professional career. The early years of golf ranked amateurs far above the professional in terms of social standing, at a time when this mattered absolutely. Pros were barred from clubhouses, left to fend for themselves as mere labourers, while the top amateurs were lauded the world over. Even as recently as the 1970s this tournament was peppered with ‘career amateurs’. Those days are gone. What remains is an event which is a key path to the pro ranks.

Kieran Day is one of those with an eye on the Tour. A member of Perth’s Cottesloe Golf Club, Day spent 10 early years in London, learning his craft in the heathland of Surrey before returning to Western Australia. He is indebted to the club for its support of his burgeoning career.

“The club and the membership have been behind me in such a big way”, says Day. “It goes deeper than financial assistance; they genuinely barrack for me.”

Young Kieran has also bent the ear of seasoned pro Brett Rumford, whom he got to know through a contact at Royal Perth.

“Brett took the time to talk, to practise with me, and give insight into the game. He’s been a mentor of sorts. Terry Gale is another to lend a hand. He had plenty to say about the history and standing of the Australian Amateur. I’m aware of what it would mean to win.”

A major figure in that history is Peter Thomson. The legendary Australian has arrived to take in the action at a course he remembers fondly.

“I had some great times here, and the holes are much the same, even if the clubhouse has changed,” Thomson says, over a sandwich and ginger beer. Thomson contested those Dunlops and Vic Opens at Yarra Yarra during the 60s and 70s and left his mark on the club forever when he suggested its 11th hole should be declared a national treasure. This is yet to happen; he’ll have to be content with five Open titles.

Another amateur in the field has already graced the Open stage. Scott Gregory is the reigning British Amateur champion. The result exempted him into the greatest tournament of all. The first thing he noticed was how close in pure ball-striking the amateurs are to their professional counterparts.

“We’re all at a similar level in that area”, recalls Gregory, “but they limit mistakes. And their preparation is miles ahead of us. The Open and British Masters were an incredible learning experience.”

He has this year’s US Masters to look forward to, and hopes to be selected for Walker Cup duty before turning pro.

“My club in Hampshire has a bit of history there, with member Neil Raymond playing before joining the tour. I’d like to add to it.”

Both impressive young men see a win this week as validation, not only of their talents, but of what they do week-in week-out in terms of practice, exercise and preparation for tournaments. They are aware of the exemptions it would afford, yet neither denies the honour they’d feel at adding their name to the list of winners. But for now it’s about rest, practice and the matches ahead under a relentless sun.