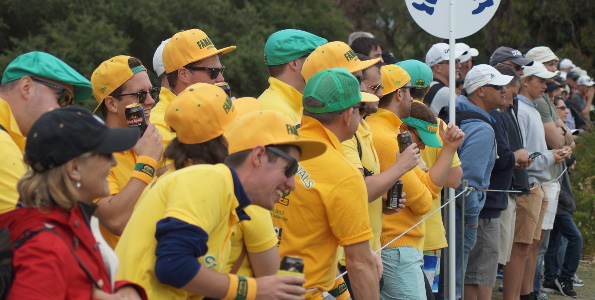 A DRIZZLY morning somehow morphed into one of sunny breaks, and the birdies flowed for most of the leading teams. Plenty of talk yesterday of aggressive 4-ball play wasn’t apparent early in the day despite ideal scoring conditions. Soft, becalmed and, for those a long way back, ostensibly a day without pressure.

Most of the early Sunday crowd is with the Australian pair. Other fairways are almost deserted; one patron has found a peaceful spot for a meditative moment, which may extend to hours. At the other extreme the Fanatics are finding their voice, despite Scott and Leishman doing little to inspire. However, two birdies are found on the front nine; it is a platform of sorts.

At 8, the first look of concern on the faces of Denmark’s Kjeldsen and Olesen. Their expressions now betray the effort spent in defending a lead. It’s been a solid even par front nine, yet there are signs the occasion is playing on their minds.

The Danish cause is not helped by the hot runs of several challengers. China, France and Sweden are throwing all they have at the course. Australia, too, has turned it on, Leishman knocking it close hole after hole, with Scott converting. But the Danes make birdies of their own to maintain a cushion.

Ahead, the early teams are taking their bow amid filling grandstands and the corporate facilities which loom over 18. As at the Olympics, there are nations simply thrilled to compete, with no illusions as to their chances of victory. Smiles all round from the likes of Malaysia, Philippines, and the Indians, who sign off at minus 5.

In the shadow of those grandstands, just right of the player exit, sits a well-dressed older gentleman, whose keen eyes are absorbing the action around the green. He’s with family and friends, and clearly enjoying the golf. Peter Thomson has lost none of his love for the game, nor his powers of observation, pointing out the altered contours of a green complex he remembers so well.

At 16 under Denmark is well placed to take this. What do they have in reserve? Are they toying with the field? Sweden has come in with a 62 and sits at 15 under. They’ll put the clubs away and watch. Australia walk off at 11 under, Adam Scott stopping to speak with Peter Thomson in one of the touching moments of the week.

The USA and China have given plenty but Kjeldsen and Olesen continue to find birdies, earning an unassailable three-shot lead with just one to play. A final birdie for 20 under is a fitting exclamation mark on a week of golf neither Dane will forget.