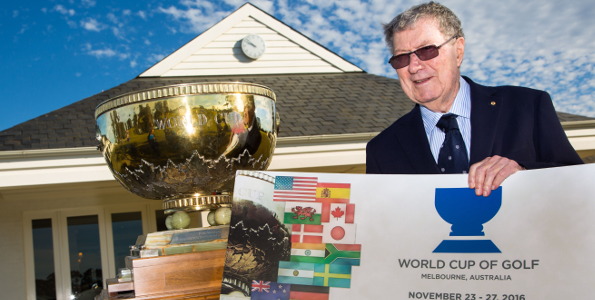 THE Seven Network has confirmed an agreement for all-encompassing coverage of the World Cup of Golf to be played in November and will also telecast the big Aussie events either side of it.

Seven’s agreement for the World Cup of Golf delivers all rights in Australia including free-to-air broadcast television, subscription television rights, and expands to Seven’s digital platforms including online, mobile and social media.

The World Cup of Golf will be played 23-27 November at Kingston Heath in Melbourne.  The event – first played in 1953 – is one of the oldest and most prestigious global golf team events in the world.  The 2016 World Cup of Golf will be the 58th staging of the event.  Names such as Snead, Hogan, Nicklaus, Palmer, Trevino, Faldo, Ballesteros, Langer, Woods, Els and Day have all been able to call themselves World Champions.

Australia has won the World Cup of Golf five times.  Jason Day and Adam Scott were champions in 2013 and will defend their title this year.

Brian Thorburn, CEO of the PGA of Australia and ISPS HANDA PGA Tour of Australasia and host Tour member of the International Federation of PGA Tours, said: “Seven is Australia’s Number 1 Television network and a strong supporter of Australian golf already, so the PGA is thrilled that Seven has secured the broadcast rights for the World Cup of Golf.  With the Emirates Australian Open the week before and the Australian PGA Championship the week after the World Cup, Australian golf fans can look forward to watching three consecutive weeks of world class golf on Channel Seven.  On behalf of the International Federation of PGA Tours and PGA we applaud Seven for their vision and their support of Australian Golf.”