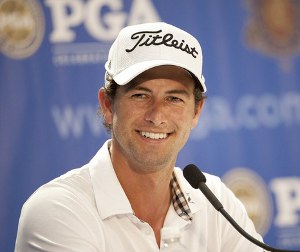 FRESH from his commanding World Golf Championship win in Ohio Adam Scott will lead the charge of nine Aussie golfers at the 2011 US PGA Championship.

Scott is optimistic one of the Australians can claim the country’s first major since Geoff Ogilvy’s 2006 US Open success.

“I’d like to think that one of us will play really well this week and contend. I think that’s a probability,” Scott said from the Atlanta Athletic Club this week.

“Obviously, Jason’s (Day) got to be feeling good and I’m feeling like I’m playing well.

“Geoff Ogilvy has got the big-time game and he’s won a lot of world events and a major. So have the other Aussies who are here this week, so I think we’ve got a strong contingent.”

But as always, winning a golf major is a big ask. The Australians face not only a very tough layout in the 7467 yard par 70 Atlanta Athletic course but are in a field of 100 of the world’s top 102 golfers.

A number of these golfers have strong claims but they also have their issues.

Scott knows only too well that winning golf tournaments back to back is not an easy task, particularly going into a major.

“There’s always going to be a little energy letdown because being in contention can take a lot out of you mentally and physically,” Scott said.

“I think it’s important that I have a quiet few days before Thursday so I can be ready to roll and 100 per cent focused on putting in a great first round.”

Jason Day will be brimming with his usual confidence and even has the luxury this week of going into a major he has actually played before. It was only his loss of momentum with the putter on Sunday that let him down and kept him from being a serious threat to Scott.

Ogilvy meanwhile does have some serious health issues with a persistent stomach problem and revealed this week he had even been hospitalised for a time on the weekend, while still managing at one stage to get within two of the lead.

Ogilvy has an as yet undiagnosed condition causing stomach cramping and weight loss.

“I don’t like to blame it but I’ve had a bizarre situation going on with my stomach for two and a half months,” Ogilvy said. “It’s an unknown thing – I have had all of the tests and they are so far inconclusive but hopefully it’s nothing long term.”

But he still believes he can contend in Atlanta.

“The heat isn’t going to help me this week but it wasn’t that long ago I was contending and last week I had 19 birdies at Firestone which shows I’m not far away. There is no reason why I can’t contend – the PGA has always been a decent tourney for me,” he said.

Baddeley too was buoyed by his performance at Firestone and was hitting the ball crisply during his final round 65.

The PGA will be telecast live in Australia on Fox Sports with later replays.