Bob Stanton is regarded as one of Australia’s most naturally gifted golfers ever, famously beating Arnold Palmer as a 20 year old and going on to cut a swathe through the world pro tours.

But there were also some unexplained and early absences from the game.

In this exclusive interview LARRY CANNING catches up with a childhood hero.

[box]When I was a 12 year old kid wondering if I was going to open the bowling for Australia in an Ashes Series or win the US Open at Pebble Beach, my two prize possessions were a shiny new Kookaburra six stitcher and a Bob Stanton mallet head putter. I never met Mr Kookaburra but I did get to know Bob Stanton some 14 years later. Poor Bob really didn’t have much of a choice. It was in the mid-eighties and I was having a serious crack at the Aussie Tour. He had returned to Australia and was making a comeback after something of a tournament hiatus. Whenever I saw him on the practice fairway, I’d drop my bag of balls right next to him, or, if he was having a putt, I might just aim at the same hole; Whatever it took to have a word with my childhood hero. Eventually Bob relented and we became friends. In fact, he took a real interest in my game and helped me develop a reliable ball flight I could trust when my main concern was throwing up on the first tee or snap hooking a drive and injuring one of the 20,000 innocent fans. I caught up with Bob recently to discuss his career and personal life and to shed some light on what happened in those years, missing from the Leaderboards.[/box]

HE’S the Aussie Champion who cut a swathe through the Australian, European and US PGA Tours back in the 60’s and 70’s. He became part of golfing folklore when, as a 20 year old, he defeated the great Arnold Palmer at the Australian Golf Club in Sydney.

Yet Bob Stanton remains an enigma, a brilliant star that shone too briefly, an unfulfilled special talent.

I tracked down Bob in Far North Queensland, in search of the real story, his sudden disappearances from the game, the drugs and alcohol rumours, looking for answers to the player I believe is best described as Australian golf’s greatest mystery man. 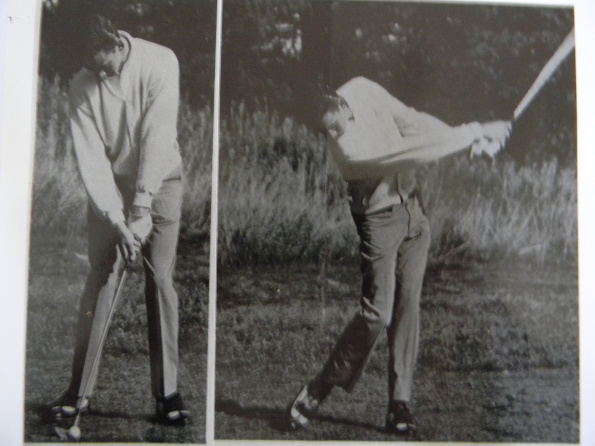 Q. Bob, you have had a colourful, spectacular career. However, do you think it is correct to describe you as Australian golf’s greatest mystery man?

I think that’s fairly true. There’ve been so many stories, innuendoes and untruths about my career and it’s good we can chat and set a few things straight.

Q. Okay, before the nitty gritty, where did your career get started?

I did my time at St Michaels Golf Club with the great Dan Cullen and you would remember one of Australian golf’s greats, Eric Cremin. He got hold of me one day and took me out to Dan and said “Have a look at this kid”. Dan watched me hit two balls and he said “that’s enough; you’ve got yourself a job”.

Q. Most people think you burst onto the scene with the surprise win over the great Arnold Palmer at the Sydney Dunlop International in 1966. What isn’t well known is you had already won the German Open earlier that year.

That’s right Larry, I went over to Europe and won the German Open by seven shots. The same year I also led the Irish Open right up to the last minute and was beaten by Christy O’Connor at Royal Dublin. I also finished third that year in the Spanish Open (to Roberto De Vicenzo, Open champion). I played in the British Open in 1966, the only Open I contested. I was in one of the last few groups going into the last round at Muirfield, playing with American Dave Marr, who won a major, the US PGA.

I wasn’t entered for the Dunlop and was pretty indifferent about playing as I had just been to Florida to get my tour card to play the US tour, but my mother actually entered me for the tournament.  That started the story for me when I beat Palmer in a playoff at The Australian. It blew a gale that week. The last day I shot par, he shot 68, an unbelievable round in the conditions. He made a 25 footer for par and I missed a four footer for birdie at the first extra hole, so we went to the second hole and Arnie three putted. It was a great occasion for Australian golf and a lot of people still ask me about that day. 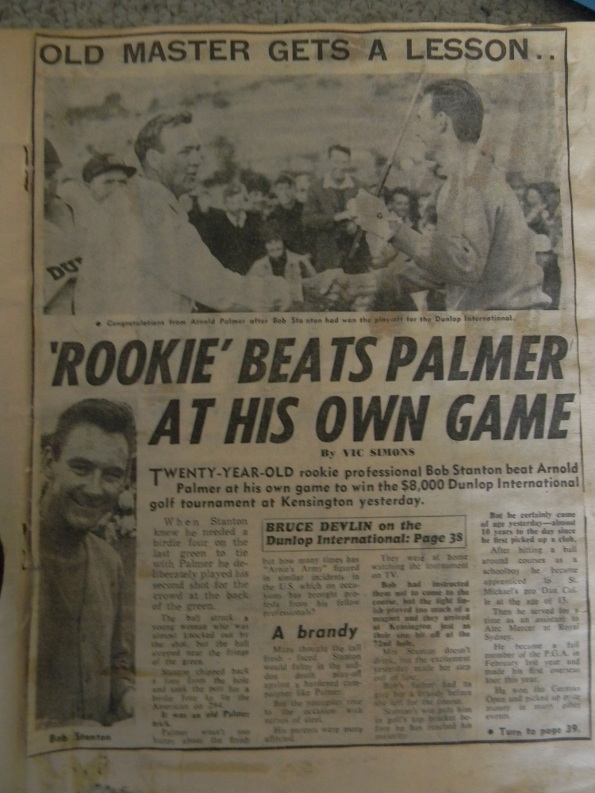 Q. After that win you headed to America?

That’s right, I finished 2nd at tour school and got my card then received an invitation to the US Masters because of the win in the Dunlop. That’s what started it all in America and I stayed there for 17 years. Spalding offered me a three year contract – $7000 the first year, $9000 the second and $11,000 the third year. I thought I was very rich.

Q. Clearly you were seen as the next superstar. That must have put a lot of pressure on you?

So many things changed for me when I went to the states. I probably had the talent of Greg Norman, but you didn’t have many people around you to help out in those days. I didn’t know enough about my game, didn’t know enough about myself and the golf swing. It became one of those things where I had some success but I really didn’t live up to my potential, that’s evident…… When my game went downhill I did not work hard at it. Simple as that – instead I just went fishing. It was a silly time and if I had it all over again I would do it differently. I would like to do it all over again, that’s for sure.

I’ve always been keen on fishing and that was the one thing that took me away from my golf. I started to buy boats and instead of practising golf I went fishing …. and that’s the real story.

Q. What prompted the rumours of the drugs and the alcohol?

I’ve been told various things over the years Larry. Why people say those things is that they really don’t know the true story. Things were made up and they just weren’t true – it’s as simple as that.

Q. So tell us more about your golf career in the states.

Leading up to those tournaments I remember I was out of money at that time. I didn’t have anything. I borrowed $1000 from a dentist friend and turned it into $33,000 during those few weeks.

Q. You took yourself off the tour and took a club job. A tough decision?

A. I had a year off in ’73 when Bruce Devlin helped me find a position in the Bahamas. I came back the next year. There was a World Open event at Pinehurst, I played with Bruce Crampton in the last round and shot 68. It was the biggest money tournament on the US tour at the time, about $300,000 – most events were half that in those days. I sat in the clubhouse and it looked like I was going to get the chocolates until four guys come over the top of me (one was Johnny Miller) ….beaten by one shot. That gave me enough money to be exempt for the next year so I thought …… beauty I can go fishing again.

Later on in 1978 I played poorly and took over the job at Diamond Head Yacht and Country Club. That was where I really honed my marketing skills, which helped me when I started my businesses when I came back to Australia.

But first there was unfinished business on the golf course.

Bob, you had played very little golf in six or seven years before that. Did you really believe you could win the Australian Open?

I have always had that “win” mentality Larry. Even when I played in the US Masters as a 21 year old I thought I could win. I was putting badly just before the Australian Open in ’84 and I remembered some advice from that great man who just left us, Kel Nagle. I worked on a routine and everything I looked at went in that week.

Tom Watson beat me by a shot, Greg Norman finished third. If I had won that Australian Open it might have changed my life again, but what it did, was put a bit of cash in my pocket and it launched my name again into the Australian public and from there I used it as a platform to start my business.

So what was your introduction to the business world?

I formed Bob Stanton Corporate Golf, which really was a trailblazer because nobody was doing corporate golf in those days and that launched my business career into so many things.

Suddenly you’re mixing with corporate high flyers from companies such as Macquarie Bank, Allianz and Lexus. Now that sounds like real pressure.

Well I’d had a bit of experience dealing with people in America, being in business and of course a little bit of bullshit goes a long way.

Okay Bob, turn back the clock and make a choice. It can be success in the corporate world – or you have a three footer to win The Open at St Andrews. What’s it to be?

That’s a very very pointed and difficult question Mr Canning. Being the competitor that I am I would have to have a foot in both camps. Is that okay if I say yes to both?

A wasted talent? I think sometimes we normal people, who have to go off to work each day, expect extraordinarily gifted individuals  like Bob Stanton of having a responsibility to us to fulfil their potential.

Maybe Bob was smart enough to get everything out of the game he needed without becoming so obsessed with perfection, it consumed him, as it has so many others.

Bob loves this quote from Sam Snead and seemingly shares the same philosophy – “The only reason I played golf was so that I could afford to go hunting and fishing.”

FOOTNOTE: Bob turned 69 last month and achieved one of his “lifetime ambitions” when he beat his age and shot 66, (five under) at the Palmer Sea Reef course in Port Douglas.