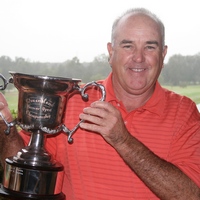 On a miserable cold and wet day at Nudgee Golf Club, Queensland professional Neil Wall has taken out the 2008 Queensland Senior Open in a dramatic playoff against Kiwi Stuart Reese.

Due to the poor weather, the third and final round was cancelled, reducing the Championship to 36 holes.
Playing the par three, 9th hole in the sudden death playoff, Wall left himself about 10 metres from the hole, while the Kiwi Reese hit a superb shot to approximately four metres.

After taking relief from casual water, Wall was left with a difficult putt across the green. The putt never left its track and subsequently found the bottom of the hole. When Reese missed his shorter putt, Wall was declared the Champion.

With unseasonal rain which drenched the course overnight and all morning, officials were forced to suspend play when two of the greens became unplayable at approximately 11:00am. When it became obvious that the round couldn’t be completed, Wall and Reese who were tied after 36 holes were forced out to decide the Championship. It was an exciting finish to an otherwise bleak day at Nudgee.

The leading amateur, finishing in equal 10th position was Nudgee member Grahame MacDonald who carded rounds of 73 (+2) and 74 (+3) for a five over par (+5) total. He was just one in front of fellow Nudgee member Kevin Yeo.

The Queensland Senior Open marks the start of the PGA’s Senior Tour which will continue over the next 5 weeks, with 15 events and $164,000 on offer for the professionals. The Senior Open also kicked off the PGA’s Living Choice Senior Series with the next event being the Living Choice Pro Am held at Twin Waters on Tuesday 29th July.

For the amateurs in the field, the event signalled the end of the 2007/ 2008 Australian Senior Amateur Order of Merit.